The "W" in Christmas

Each December, I vowed to make Christmas a calm and peaceful experience.
I had cut back on nonessential obligations, extensive card writing, endless baking, decorating,
and even overspending.  Yet still, I found myself exhausted, unable to appreciate the
precious family moments, and of course, the true meaning of Christmas.

My son, Nicholas, was in kindergarten that year. It was an exciting season for a six-year-old.
For weeks, he'd been memorizing songs for his school's "Winter Pageant."

I didn't have the heart to tell him I'd be working the night of the production.
Unwilling to miss his shining moment, I spoke with his teacher.
She assured me there'd be a dress rehearsal the morning of the presentation.
All parents unable to attend that evening were welcome to come then.
Fortunately, Nicholas seemed happy with the compromise.

So, the morning of the dress rehearsal, I filed in ten minutes early,
found a spot on the cafeteria floor and sat down.
Around the room, I saw several other parents quietly scampering to their seats.

As I waited, the students were led into the room.
Each class, accompanied by their teacher, sat cross-legged on the floor.
Then, each group, one by one, rose to perform their song.

Because the public school system had long stopped referring to the holiday as Christmas,
I didn't expect anything other than fun, commercial entertainment - songs of reindeer,
Santa Claus, snowflakes and good cheer.
When my son's class rose to sing, "Christmas Love," I was slightly taken aback by its bold title.

Nicholas was aglow, as were all of his classmates, adorned in their best for the show.
The children in the front row center stage held up signs with large letters,
to spell out the title of the song.

As the class would sing "C is for Christmas," a child would hold up the letter C.
Then, "H is for Happy," and on and on, until each child holding up his portion
had presented the complete message,
"Christmas Love."

The performance was going smoothly, until suddenly, we noticed her;
a small, quiet, girl in the front row holding the letter "M" upside down!
She was totally unaware her letter "M" appeared as a "W."

The audience of 1st through 6th graders snickered at this little one's mistake.
But she had no idea they were laughing at her, so she stood tall, proudly holding her "W."

Although many teachers tried to shush the children, the laughter continued until
the last letter was raised, and we all saw it together.
A hush came over the audience and eyes began to widen.
In that instant, we understood the reason we were there,
and why we celebrated the holiday in the first place.
Why even in the chaos, there was a purpose for our festivities.

When the last letter was held high, the message read loud and clear:

And, I believe, He still is.
Amazed in His presence,
Humbled by His love.

May each of you have a Merry Christmas as you reflect on His Amazing Love for us. 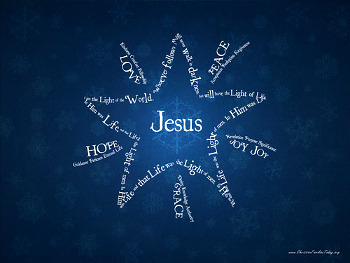 The Story of Christmas


Maybe your life resembles a Bethlehem stable.
Crude in some spots, smelly in others. Not much glamour.
You do your best to make the best of it, but try as
you might, the roof still leaks, and the winter wind still sneaks through
the holes you just can’t seem to fix.
You’ve shivered through your share of cold nights.
And you wonder if God has a place for a person like you.

Find your answers in the Bethlehem stable.
The story of Christmas is the story of God’s relentless love for us.
The moment Mary touched God’s face is the moment God made his case:
there is no place he will not go.
No place is too common.
No person is too hardened.
No distance is too far.
There is no person he cannot reach.
There is no limit to his love!

Max Lucado
–Because of Bethlehem.