One of my favorite coffee mugs was broken this week.
Not sure how it happened.
Just found it sitting there on the counter with the handle broken off.
A friend had given it to me because it has one of my favorite Bible verses on it.
“I press toward the mark for the prize of the high calling of God”
(Philippians 3:14).

As I stood there looking with disappointment at my handle-less cup I realized
that now the mug actually illustrates the verse.
Before it was a very nice coffee cup with a really meaningful verse on it.
Now it may represent what Paul had in mind when he penned the words.

“Not that I have already attained, or am already perfected, but I press on,
that I may lay hold of that for which Christ Jesus has also laid hold of me.
Brothers, I do not count myself to have apprehended.
But one thing I do:
Forgetting those things which are behind and reaching forward to those things which are ahead,
I press toward the goal for the prize of which God has called me heavenward in Christ Jesus” (Philippians 3:12-14).

Coffee mugs are made with a purpose.
Mugs are made for drinking coffee, for drinking hot chocolate,
for holding pens, for collecting change.
They are not made to simply sit on a shelf and gather dust.
When you use a mug there is the possibility that it will get damaged or broken.

Jesus said it this way,

When that happened to Paul, he chose to press on.
He did not allow his life to end with a broken handle.
He kept pushing forward.
He continued to move forward toward the prize God had called him to.

My mug with no handle will most likely be reassigned to be a penholder or a change cup.
It has served me well. Many good cups of coffee have been consumed from that mug.
But it is time for this mug to move on to a new goal, a new purpose for being.

What about you?
Has life been unkind to you lately?
Have you considered retiring, sitting out the fight, being shelved?
Please don’t.
Take a lesson from my mug.
Even if your handle gets broken . . . press on.
Move forward.
Your handle is broken, but you are not dead.
Keep living.
God has something in store for you.
REALIZE GOD HAS A GOAL FOR YOUR LIFE.
RECOGNIZE THAT YOU HAVE NOT YET ARRIVED AT YOUR GOAL.
~author unknown~ 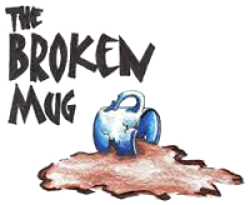